The Delicate Application of Joy 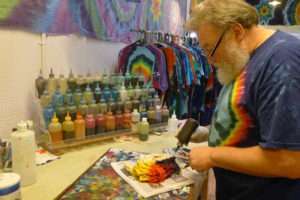 About A Brighter World

In the fall of 1987, I learned the basics of tie-dyeing.  Soon after, we began making bandanas to sell at Grateful Dead concerts across the country. I did this for the next 8 years. In 1995, I returned to UCSC to finish my Undergraduate Degree, which I received in 1999. I then worked at UCSC as a groundskeeper. I started making tie-dyes again full-time in 2005 to sell at music, art and street festivals.

I want to thank Jerry, and Eileen for making it possible and enjoyable. All the people who have purchased items from me over the past 30 years, the people who have enjoyed the items I have made, and now the residents of Santa Cruz, as well as everyone who comes into the store.

Welcome to the rainbow, that is becoming A BRIGHTER WORLD. Enjoy 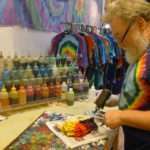 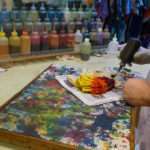 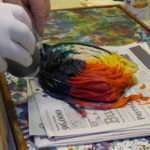 A Studio Full of Color

Tie-dyeing is a way of coloring fabric by soaking it in a solution, which adheres the dye to the fabric. 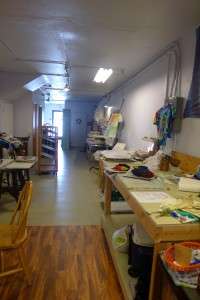 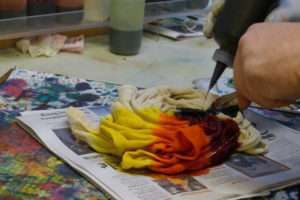 Each item is hand selected, evaluated for quality and imperfections that may enhance the artistic appeal of the design. The fabric is then folded and tied. The way the item is folded determines what the pattern will look like after it is dyed. 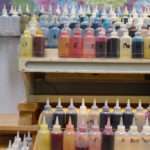 Squeeze bottles or brushes can be used to apply dye.  At A Brighter World we maintain a vast collection of unique and custom colors for our artists to choose from. It seems each artist has their own favorite, what’s yours? 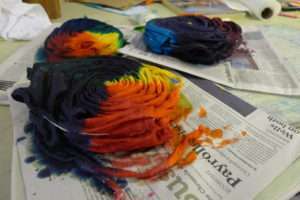 After applying the dye, it’s left to set and cure.

The newly colored fabric is then laundered before sold or worn.

Using this process and with proper care, colors will not run or fade. Your tie-dye will last with the fabric. 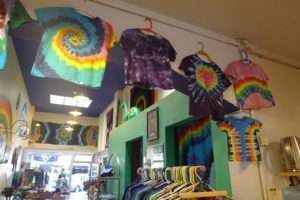 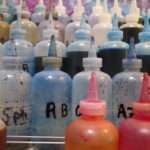 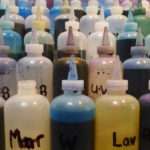 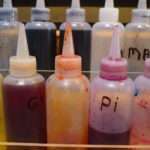 Tie Dye Designs Are As Unique As Snowflakes

Interested in a specific design, color, size, or garment? Can’t find something you’re looking for? We do custom work on fabric you’d like.

Our comprehensive studio is open to the public for walk-in students, as well as scheduled classes. We have plenty of garments to choose from, or bring your own.  Time in the studio is about 30 minutes to 1 or 2 hours.  Items then set or cure and are laundered. They are ready the next day, early afternoon, and we also ship items if you are not able to return.

You will learn the whole process, some of the science involved, how to fold the item, as well as how, where and why to apply the dye. 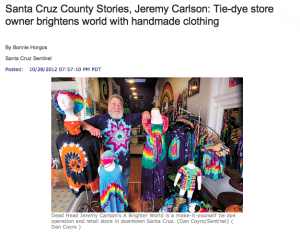 Due to the current circumstances, the store Located at 119 Walnut in Downtown Santa Cruz is currently closed. Our online store has a plethora of items to meet all your tie dye needs, including our ready-to-use To Go Tie Dye Kits and Face Masks.

Thank you for your patience and understanding.